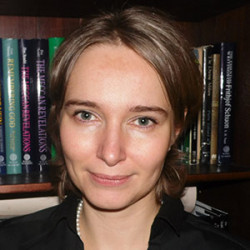 Tatiana Tiaynen-Qadir is a Postdoctoral Researcher at the Sociology Unit, Faculty of Social Sciences, University of Turku, Finland. She was awarded her doctoral degree in Social Anthropology from the University of Tampere. She has worked on a number of research projects and as university lecturer in Finland and in Russian Karelia. Her research focuses on transnational anthropology of the family, religious studies, and the culture of therapeutic in modern Russia and Finland. She has recently been studying images and materiality in Islam and Orthodox Christianity. She has published two monographs and a number of articles and chapters in peer-reviewed journals and edited volumes in Russian, Finnish, and English languages (including with Routledge, Gaudeamus, and the Russian Academy of Science).

Profile at the University of Turku

Uncanny Images and the Literalism of Modernity